Join us on July 17th to raise money for the To Cure A Rose Foundation and to help save Rose, the daughter of Casey McPherson (of Alpha Rev).

Alpha Rev will perform live at Haute Spot on May 23rd for an open-air, socially distant benefit concert. Event proceeds go to the To Cure A Rose Foundation. Together, we can help provide a second chance at life for children with rare diseases. To watch the Livestream click here: https://youtu.be/NlNEd3Cv0_M 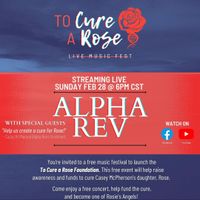 To Cure A Rose Fest

For the first time in three years, Alpha Rev will be fully back together on stage LIVE performing just for you. This Sunday, February 28th at 6pm CST, Tabber, Batch, Tony, Ty, Scott, Travis and I will be putting on an online two-hour show in honor of International Rare Disease Day and the launch of the To Cure A Rose Foundation. As some of you may know, my five-year-old daughter Rose was recently diagnosed with a rare genetic disease.

Before becoming a father, music was my life. Songwriting and performing around the world was my way of surviving after losing both my dad and brother at a young age. But when I was told I might also lose my daughter Rose, the music stopped. I was knocked down to my knees, but we pick ourselves up again and I’m ready to get back on stage to use music to fight for Rose’s future.

Join us LIVE this Sunday!

You can purchase a ticket here as a donation towards the event expenses, or you can go to this link below for free! Can't wait to see you there! Youtube: https://youtu.be/ZzQX1YXbhjU

Come hang out with Casey McPherson as he plays songs from Alpha Rev, Flying Colors, and some new ones you haven't heard yet! Feel free to make requests, chat, and heckle :) See ya Saturday!

Come spend the evening with Casey playing an acoustic show of the new music, Volume 1 of the Case Sessions. You'll be listening and talking about the new record, and just having a good time.

This is album is a beautiful collection of never heard before songs written over the last two years by Casey McPherson of Alpha Rev and Flying Colors. Some are rough mixes, while others are large productions. All are an exploration into the idea of connection, relationship, and acceptance of life's vast changes that come.

click below to buy the new album!!! Also check into becoming a member of cas.e sessions!!

Cas.e Sessions Volume 1 is the first self produced album from Alpha Rev. It is an exclusive fanclub with a music and video experience. This is the music from Volume 1. Some amazing songs from some even more amazing experiences. THIS IS ONLY A DIGITAL DOWNLOAD!!

Click on https://gumroad.com/l/casesessions to become a member of the case sessions! You get a new song, a short documentary, and an online show every month for the price of a latte.

Casey will sing a song you want through voicemail or email and dedicate it to anyone you want. Perfect Christmas gift. Limited quanity available. Just specify the song, who it's going to, and by when! (song must be approved by Casey after purchase, if not, 100% money back)

Get the new record! All songs from the first season of the cas.e sesisons. These songs were all written around a different experience and ended up being an extremely creative journey. Special thanks to Matt Parmenter (engineer and mix), Tony Rogers (cello), Tabber Millard (drums), Alan Parson (produced "White Matter Recess"), Lang Freeman (mix), and Edgel Groves (mgmt) for helping me get these done!

CLICK HERE TO BECOME A MEMBER OF THE CAS.E SESSIONS

Hi - I’m Casey McPherson. I have been making music all my life. I started with a piano when I was 5, and it was all downhill from there!! My first band was called Endochine, then I started Alpha Rev after that band broke up. The drummer broke my nose.. but I did hit him first... ah, rock bands in your 20s :) We’re still friends, and we all learned alot.

Alpha Rev has an amazing cast of band members that change periodically, and I keep it running by writing and recording music for it. I’ve played with some amazing artists over the years, had a couple of top 10 singles on the radio, a video featured on VH1, songs in a many movies and tv shows, and ultimately a very successful career. I’m so grateful for it!! But I really all owe it to you, the listener. The music believer. I wanted to get closer to that.. So, I started Cas.e Sessions in 2016, as a music and film experience for my dedicated fans, and creativity lovers. I play them an online show, write a new song, and make a documentary every month around the inspiration of the song. If you’re interested in getting music every month and becoming a member you can go to casesesssions.com. It’s a fantastic group of people and I think you’ll find it more of a community than anything else. I’ve most recently released the music of the first season now, available on alpharev.com and all the other places you go :)

I have also entered into the progressive music world in the most unlikely way. Mike Portnoy had an Endochine record from long ago, and recomended me as the last member, lead singer and guitar player for my prog band called "Flying Colors." These guys have been mentors and inspirational brothers to me, and we've released two records, with another on the way slotted for 2019. It's some of the most genre defying, generational crossing music I've every been apart of creating. On top of that, the progressive music community is second to none in accepting people for who you are, especially when you are willing to go outside of the box!! Since Flying Colors, I've also stepped into a band called "The Sea Within" that I've been singing for in Europe, which is another amazing progressive experience.

My favorite part of my job is how it affects.... you. How music gets us through the hard times, gives us melody to our best of times, and reminds us that we’re all.. well, human. We all have a story to tell, we all have a battle to fight, we all have a mountain to climb. Music is my journey of experiencing life, and putting notes to all of ours. If my music has affected you in anyway, please share it with others. It is how my career is sustained, and how I can keep doing this! Thanks for reading this, I hope I can inspire you on your next mountain climb :)